Thread Safe means you can modify on any thread simultaneously;

A condition variable whose semantics follow those used for POSIX-style conditions.

A condition is another type of semaphore that allows threads to signal each other when a certain condition is true. Conditions are typically used to indicate the availability of a resource or to ensure that tasks are performed in a specific order. When a thread tests a condition, it blocks unless that condition is already true. It remains blocked until some other thread explicitly changes and signals the condition. The difference between a condition and a mutex lock is that multiple threads may be permitted access to the condition at the same time. The condition is more of a gatekeeper that lets different threads through the gate depending on some specified criteria.

Due to the subtleties involved in implementing operating systems, condition locks are permitted to return with spurious success even if they were not actually signaled by your code. To avoid problems caused by these spurious signals, you should always use a predicate in conjunction with your condition lock.

A boolean predicate is an important part of the semantics of using conditions because of the way signaling works. Signaling a condition does not guarantee that the condition itself is true. Using a predicate ensures that these spurious signals do not cause you to perform work before it is safe to do so. The predicate itself is simply a flag or other variable in your code that you test in order to acquire a Boolean result.

The semantics for using an NSCondition object is as follows:

A lock that can be associated with specific, user-defined conditions.

Using an NSConditionLock object, you can ensure that a thread can acquire a lock only if a certain condition is met.

An NSConditionLock object defines a mutex lock that can be locked and unlocked with specific values.

NSConditionLock just support condition with a int, if you want support a custom condition value, you should use NSCondition.

The object passed to the @synchronized directive is a unique identifier used to distinguish the protected block.

If you execute the preceding method in two different threads, passing a different object for the anObj parameter on each thread, each would take its lock and continue processing without being blocked by the other. If you pass the same object in both cases, however, one of the threads would acquire the lock first and the other would block until the first thread completed the critical section.

Perform selector on a thread

If no input sources or timers are attached to the run loop, this method exits immediately;

The Run Loop Sequence of Events

Each time you run it, your thread’s run loop processes pending events and generates notifications for any attached observers. The order in which it does this is very specific and is as follows:

A queue doesn't own a thread and a thread is not bound to a queue. There are threads and there are queues. Whenever a queue wants to run a block, it needs a thread but that won't always be the same thread. It just needs any thread for it (this may be a different one each time) and when it's done running blocks (for the moment), the same thread can now be used by a different queue.

There's also no guarantee that a given serial queue will always use the same thread.

The only exception is the main queue:

Submits a block to a dispatch queue for synchronous execution. Unlike

dispatch_async, this function does not return until the block has finished. Calling this function and targeting the current queue results in deadlock.

As an optimization, this function invokes the block on the current thread when possible.

When QueueA runs the block, it will temporarily own a thread, any thread. someFunctionA(...)will execute on that thread. Now while doing the synchronous dispatch, QueueA cannot do anything else, it has to wait for the dispatch to finish. QueueB on the other hand, will also need a thread to run its block and execute someFunctionB(...). So either QueueA temporarily suspends its thread and QueueB uses some other thread to run the block or QueueA hands its thread over to QueueB (after all it won't need it anyway until the synchronous dispatch has finished) and QueueB directly uses the current thread of QueueA.

Needless to say that the last option is much faster as no thread switch is required. And this is the optimization the sentence talks about. So a dispatch_sync() to a different queue may not always cause a thread switch (different queue, maybe same thread).

But a dispatch_sync() still cannot happen to the same queue (same thread, yes, same queue, no). That's because a queue will execute block after block and when it currently executes a block, it won't execute another one until this one is done. So it executes BlockA and BlockA does a dispatch_sync() of BlockB on the same queue. The queue won't run BlockB as long as it still runs BlockA, but running BlockA won't continue until BlockB has run.

Important: You should never call the dispatch_sync or dispatch_sync_f function from a task that is executing in the same queue that you are planning to pass to the function. This is particularly important for serial queues, which are guaranteed to deadlock, but should also be avoided for concurrent queues.

The misunderstanding here is that dispatch_get_specific doesn't traverse the stack of nested queues, it traverses the queue targeting lineage.

Modifying the target queue of some objects changes their behavior: 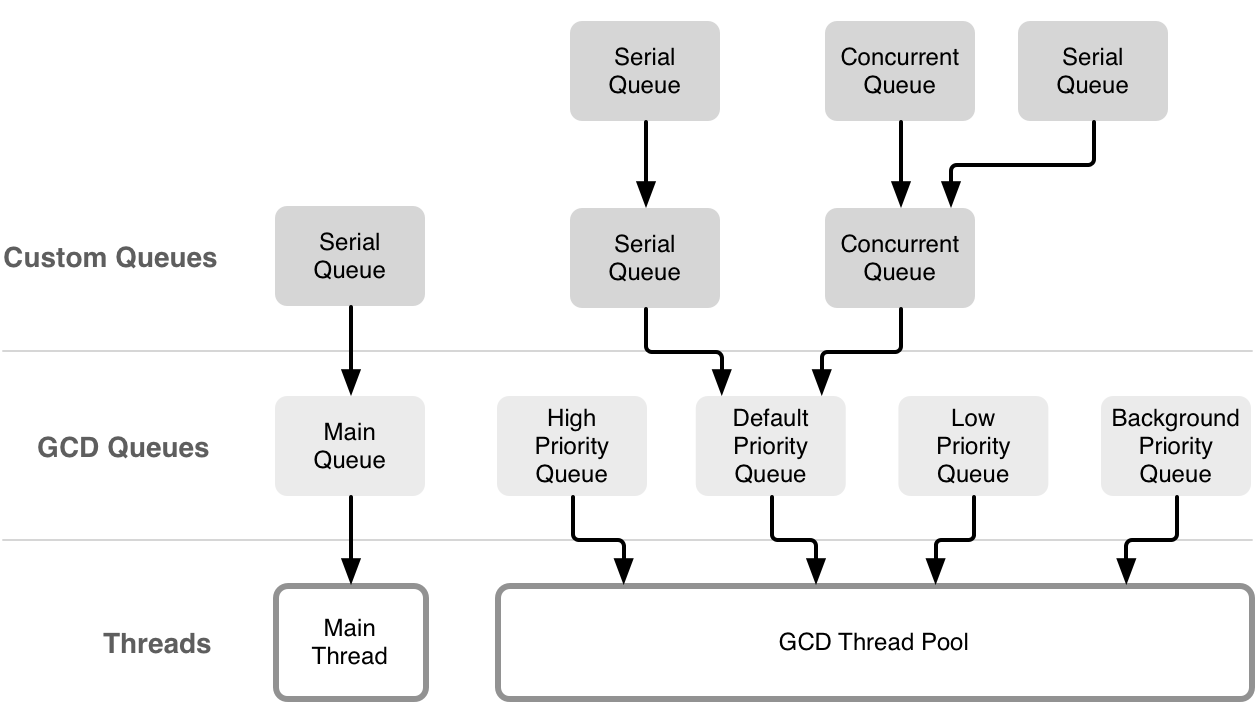 By default, a newly created queue forwards into the default priority global queue.