Many problems require a probability estimate as output. Logistic regression is an extremely efficient mechanism for calculating probabilities. Practically speaking, you can use the returned probability in either of the following two ways:

Let's consider how we might use the probability "as is." Suppose we create a logistic regression model to predict the probability that a dog will bark during the middle of the night. We'll call that probability:

If the logistic regression model predicts a p(bark | night) of 0.05, then over a year, the dog's owners should be startled awake approximately 18 times:

In many cases, you'll map the logistic regression output into the solution to a binary classification problem, in which the goal is to correctly predict one of two possible labels (e.g., "spam" or "not spam").

You might be wondering how a logistic regression model can ensure output that always falls between 0 and 1. As it happens, a sigmoid function, produces output having those same characteristics: 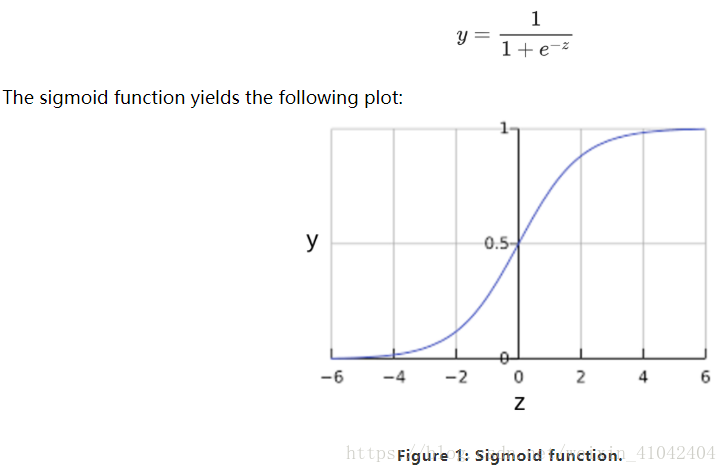 If z represents the output of the linear layer of a model trained with logistic regression, then sigmoid(z) will yield a value (a probability) between 0 and 1. 如果 z 表示使用逻辑回归训练的模型的线性层的输出，则 S 型(z) 函数会生成一个介于 0 和 1 之间的值（概率）。 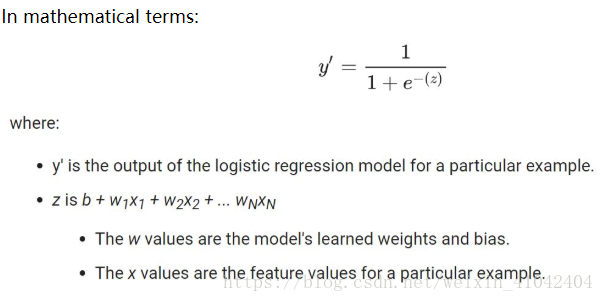 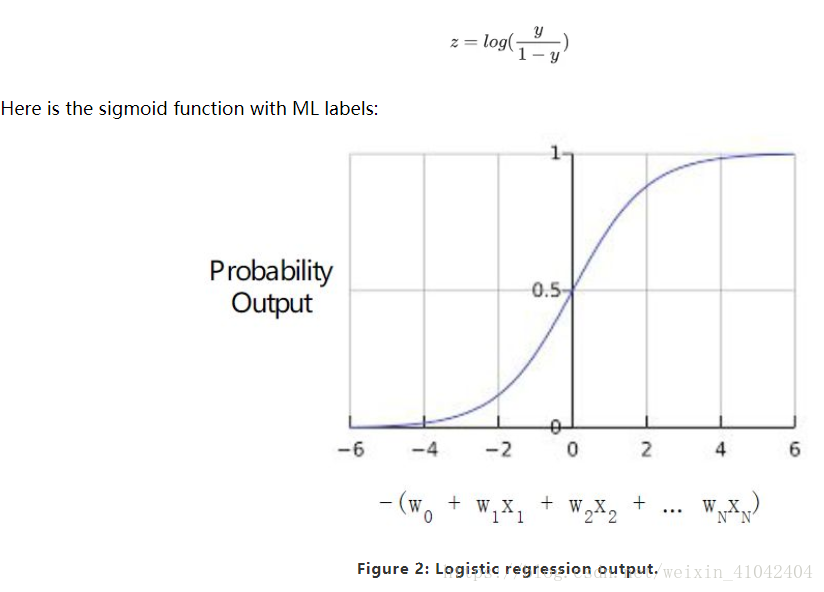 Suppose we had a logistic regression model with three features that learned the following bias and weights:

Further suppose the following feature values for a given example:

Consequently, the logistic regression prediction for this particular example will be 0.731: 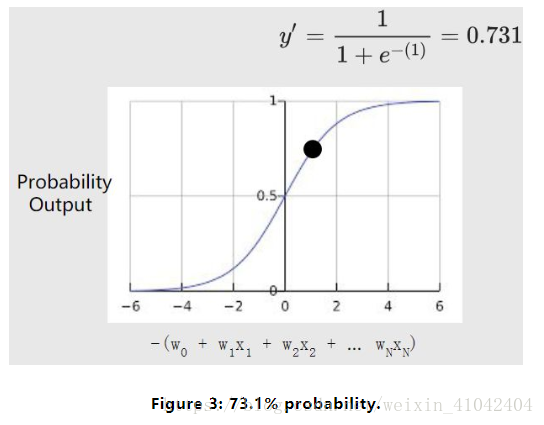 The loss function for linear regression is squared loss.

The loss function for logistic regression is Log Loss, which is defined as follows:

The equation for Log Loss is closely related to Shannon's Entropy measure from Information Theory.

It is also the negative logarithm of the likelihood function, assuming a Bernoulli distribution of y.

Imagine that you assign a unique id to each example, and map each id to its own feature. If you don't specify a regularization function, the model will become completely overfit. That's because the model would try to drive loss to zero on all examples and never get there, driving the weights for each indicator feature to +infinity or -infinity.

This can happen in high dimensional data with feature crosses, when there’s a huge mass of rare crosses that happen only on one example each.当有大量罕见的特征组合且每个样本中仅一个时，包含特征组合的高维度数据会出现这种情况。

Fortunately, using L2 or early stopping will prevent this problem.

A function that maps logistic or multinomial regression output (log odds) to probabilities, returning a value between 0 and 1:

where z in logistic regression problems is simply:

In other words, the sigmoid function converts z into a probability between 0 and 1.

In some neural networks, the sigmoid function acts as the activation function.

A type of classification task that outputs one of two mutually exclusive互斥 classes.

For example, a machine learning model that evaluates email messages and outputs either "spam" or "not spam" is a binary classifier.

A model that generates a probability for each possible discrete label value in classification problems by applying a sigmoid function to a linear prediction.

The logarithm of the odds of some event.

The log-odds is simply the logarithm of the odds.

By convention, "logarithm" refers to natural logarithm, but logarithm could actually be any base greater than 1. 按照惯例，“对数”是指自然对数，但对数实际上可以是大于1的任何基数。

Sticking to convention, the log-odds of our example is therefore:

The log-odds are the inverse of the sigmoid function.