In Figures 1 and 2, imagine the following: 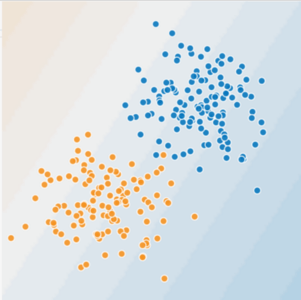 Figure 1. Is this a linear problem?

Can you draw a line that neatly separates the sick trees from the healthy trees? Sure. This is a linear problem. The line won't be perfect. A sick tree or two might be on the "healthy" side, but your line will be a good predictor.

Now look at the following figure: 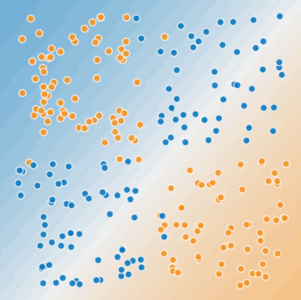 Figure 2. Is this a linear problem?

Can you draw a single straight line that neatly separates the sick trees from the healthy trees? No, you can't. This is a nonlinear problem. Any line you draw will be a poor predictor of tree health. 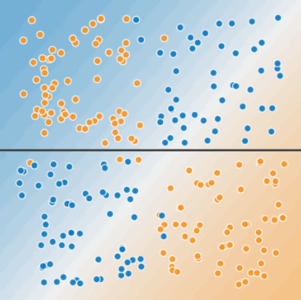 To solve the nonlinear problem shown in Figure 2, create a feature cross.

A feature cross is a synthetic feature that encodes nonlinearity in the feature space by multiplying two or more input features together. (The term cross comes from cross product.) Let's create a feature cross named x3 by crossing x1 and x2:

We treat this newly minted x3 feature cross just like any other feature. The linear formula becomes:

A linear algorithm can learn a weight for w3 just as it would for w1 and w2. In other words, although w3 encodes nonlinear information, you don’t need to change how the linear model trains to determine the value of w3.

We can create many different kinds of feature crosses. For example:

Thanks to stochastic gradient descent, linear models can be trained efficiently. Consequently, supplementing scaled linear models with feature crosses has traditionally been an efficient way to train on massive-scale data sets.

1.synthetic feature:
A feature not present among the input features, but created from one or more of them. Kinds of synthetic features include:
1.Bucketing a continuous feature into range bins.
2.Multiplying (or dividing) one feature value by other feature value(s) or by itself.
3.Creating a feature cross.
Features created by normalizing or scaling alone are not considered synthetic features.

Suppose you create a feature cross of these two feature vectors:

This feature cross is a 25-element one-hot vector (24 zeroes and 1 one). The single 1 in the cross identifies a particular conjunction of latitude and longitude. Your model can then learn particular associations about that conjunction.

Suppose we bin latitude and longitude much more coarsely粗, as follows:

Creating a feature cross of those coarse bins leads to synthetic feature having the following meanings:

Now suppose our model needs to predict how satisfied dog owners will be with dogs based on two features:

If we build a feature cross from both these features:

then we'll end up with vastly more predictive ability than either feature on its own.

Can a feature cross truly enable a model to fit nonlinear data?

Task: Try to create a model that separates the blue dots from the orange dots by manually changing the weights of the following three input features:

Now let's play with some advanced feature cross combinations. The data set in this Playground exercise looks a bit like a noisy bullseye from a game of darts飞镖游戏的噪音靶心, with the blue dots in the middle and the orange dots in an outer ring. 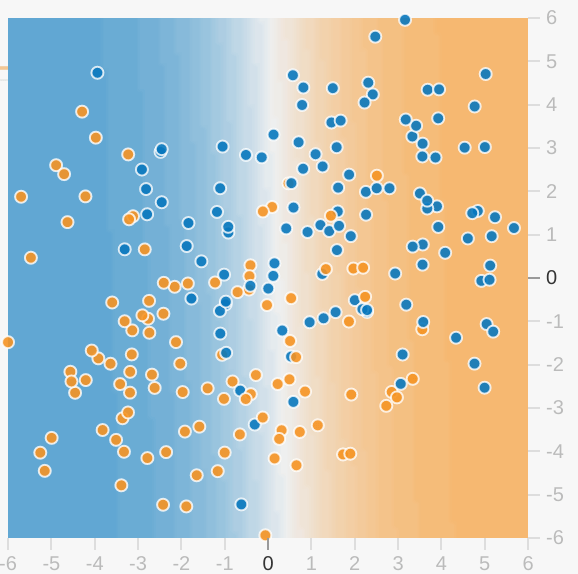 Note the following about the model visualization:

In the case of spam vs. not spam, the features could be the word count and the number of recipients of the email.

Note: Appropriate axis values will depend on feature data. The axis values shown above would not make sense for word count or number of recipients, as neither can be negative.

A blue background around a blue dot means that the model is correctly predicting that example.

Conversely, an orange background around a blue dot means that the model is incorrectly predicting that example.

Use the visualization to judge your model's progress. Beyond the colors, Playground also displays the model's current loss numerically.

Task 1: Run this linear model as given. Spend a minute or two (but no longer) trying different learning rate settings to see if you can find any improvements. Can a linear model produce effective results for this data set?

Task 3: When you have a good model, examine the model output surface (shown by the background color).

The model output surface does not look like a linear model. Rather, it looks elliptical.

In the following exercise, you'll explore feature crosses in TensorFlow:

Different cities in California have markedly different housing prices. Suppose you must create a model to predict housing prices. Which of the following sets of features or feature crosses could learn city-specific relationships between roomsPerPerson and housing price?

Binning is a good idea; however, a city is the conjunction of latitude and longitude, so separate feature crosses prevent the model from learning city-specific prices.

Binning is good because it enables the model to learn nonlinear relationships within a single feature.这样可以让模型了解单个特征内的非线性关系. However, a city exists in more than one dimension, so learning city-specific relationships requires crossing latitude and longitude.