complete this exercise that explores overuse of feature crosses.

Task 1: Run the model as is, with all of the given cross-product features. Are there any surprises in the way the model fits the data? What is the issue?

Surprisingly, the model's decision boundary looks kind of crazy. In particular, there's a region in the upper left that's hinting towards blue, even though there's no visible support for that in the data. 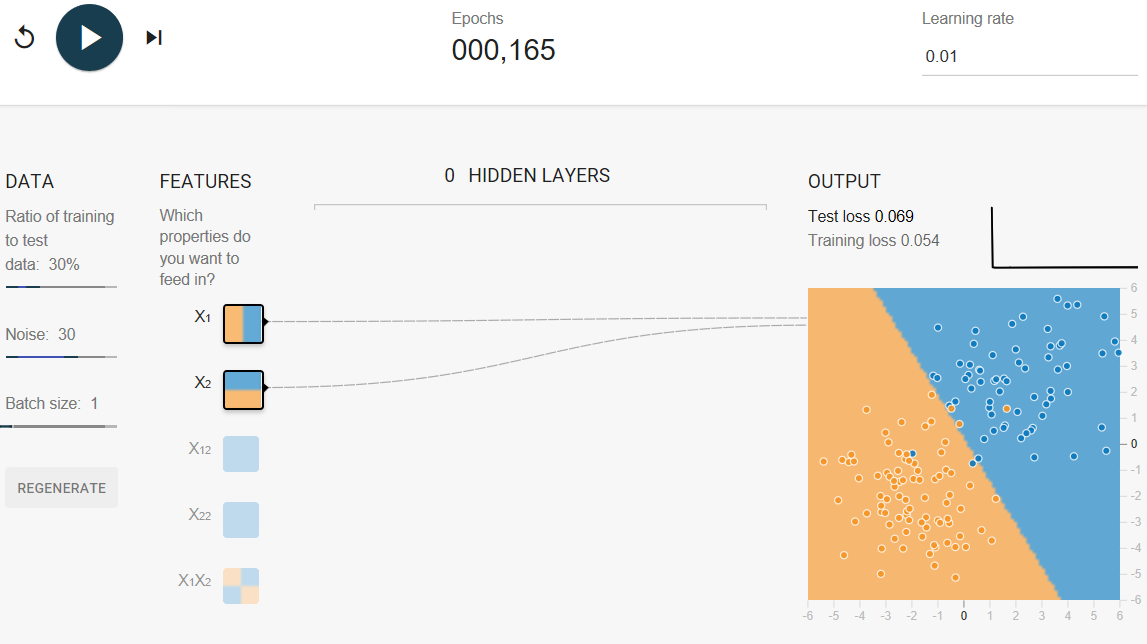 Removing all the feature crosses

Removing all the feature crosses gives a saner合理 model (there is no longer a curved boundary suggestive of overfitting) and makes the test loss converge.

After 1,000 iterations, test loss should be a slightly lower value than when the feature crosses were in play (although your results may vary a bit, depending on the data set).

The data in this exercise is basically linear data plus noise. If we use a model that is too complicated, such as one with too many crosses, we give it the opportunity to fit to the noise in the training data, often at the cost of making the model perform badly on test data.

Consider the following generalization curve, which shows the loss for both the training set and validation set against the number of training iterations.

Figure 1 shows a model in which training loss gradually decreases, but validation loss eventually goes up. In other words, this generalization curve shows that the model is overfitting to the data in the training set. Channeling our inner Ockham奥卡姆, perhaps we could prevent overfitting by penalizing complex models, a principle called regularization.

In other words, instead of simply aiming to minimize loss (empirical risk minimization):

We can quantify complexity using the L2 regularization formula, which defines the regularization term as the sum of the squares of all the feature weights:

In this formula, weights close to zero have little effect on model complexity, while outlier weights can have a huge impact.

But w3 (bolded above), with a squared value of 25, contributes nearly all the complexity. The sum of the squares of all five other weights adds just 1.915 to the L2 regularization term.

Performing L2 regularization has the following effect on a model

Increasing the lambda value strengthens the regularization effect. For example, the histogram of weights for a high value of lambda might look as shown in Figure 2.

Lowering the value of lambda tends to yield a flatter histogram, as shown in Figure 3. 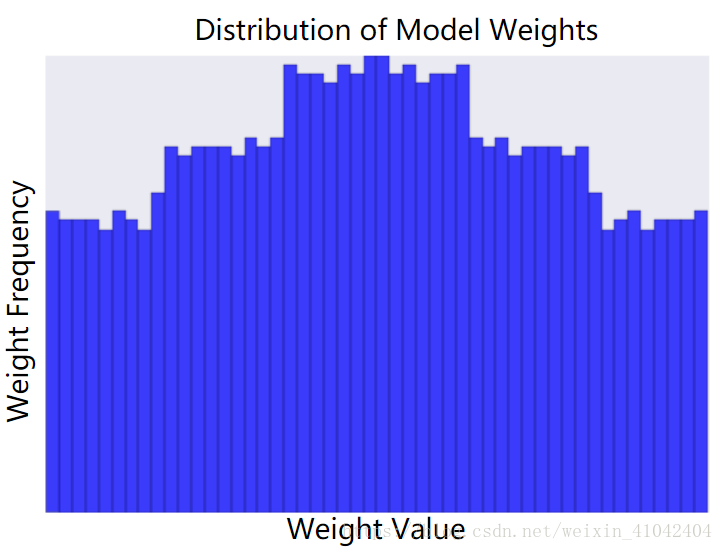 Figure 3. Histogram of weights produced by a lower lambda value.

When choosing a lambda value, the goal is to strike the right balance between simplicity and training-data fit:

Early stopping means ending training before the model fully reaches convergence. In practice, we often end up with some amount of implicit early stopping when training in an online(continuous) fashion. That is, some new trends just haven't had enough data yet to converge.

Increasing the regularization rate from 0 to 0.3 produces the following effects:

Note: While test loss decreases, training loss actually  increases. This is expected, because you've added another term to the loss function to penalize complexity. Ultimately, all that matters is test loss, as that's the true measure of the model's ability to make good predictions on new data.

2.The delta between Test loss and Training loss drops significantly.

3.The weights of the features and some of the feature crosses have lower absolute values, which implies that model complexity drops.

Which of the following statements are true?

(T)L2 regularization will encourage many of the non-informative weights to be nearly (but not exactly) 0.0.

(F)L2 regularization will encourage most of the  non-informative weights to be exactly 0.0.(L2 regularization penalizes larger weights more than smaller weights. As a weight gets close to 0.0, L2 "pushes" less forcefully toward 0.0. )

Imagine a linear model with two strongly correlated features; these two features are nearly identical copies of one another but one feature contains a small amount of random noise.  If we train this model with L2 regularization, what will happen to the weights for these two features?

(T)Both features will have roughly equal, moderate weights.(L2 regularization will force the features towards roughly equivalent weights that are approximately half of what they would have been had only one of the two features been in the model.)

An algorithm that balances two goals:

For example, a function that minimizes loss+regularization on the training set is a structural risk minimization algorithm.

The penalty on a model's complexity. Regularization helps prevent overfitting. Different kinds of regularization include:

(This is an overloaded term. Here we're focusing on the term's definition within regularization.)

Raising the regularization rate reduces overfitting but may make the model less accurate.

A method for regularization that involves ending model training before training loss finishes decreasing. In early stopping, you end model training when the loss on a validation data set starts to increase, that is, when generalization performance worsens.