Problem Description
Nowadays, little haha got a problem from his teacher.His teacher wants to design a big logo for the campus with some circles tangent with each other. And now, here comes the problem. The teacher want to draw the logo on a big plane. You could see the example of the graph in the Figure1 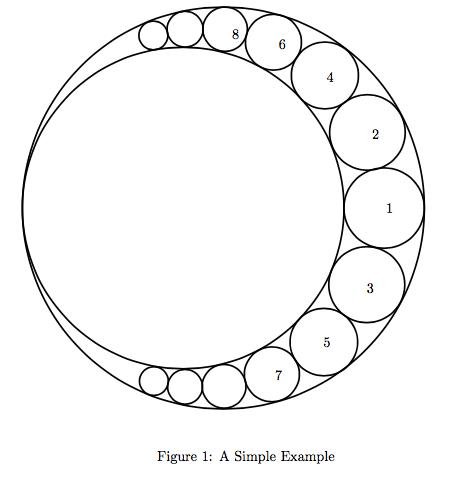 At first, haha's teacher gives him two big circles, which are tangent with each other. And, then, he wants to add more small circles in the area where is outside of the small circle, but on the other hand, inside the bigger one (you may understand this easily if you look carefully at the Figure1.

The teacher wants to know the total amount of pigment he would use when he creates his master piece.haha doesn't know how to answer the question, so he comes to you.

Task
The teacher would give you the number of small circles he want to add in the figure. You are supposed to write a program to calculate the total area of all the small circles.
Input
The first line contains a integer t(1≤t≤1200), which means the number of the test cases. For each test case, the first line insist of two integers R1 and R2 separated by a space (1≤R≤100), which are the radius of the two big circles. You could assume that the two circles are internally tangented. The second line have a simple integer N (1≤N≤10 000 000), which is the number of small circles the teacher want to add.
Output
For each test case:
Contains a number in a single line, which shows the total area of the small circles. You should out put your answer with exactly 5 digits after the decimal point (NO SPJ).
Sample Input
2 5 4 1 4 5 1
Sample Output
3.14159 3.14159
Source
2017中国大学生程序设计竞赛 - 网络选拔赛
笛卡尔定理
参考分析
posted on 2017-08-20 22:47  半根毛线  阅读(239)  评论(0)  编辑  收藏
刷新评论刷新页面返回顶部
halfyarn@gmail.com