It is easy and interesting to develop ASP.NET Core apps by using Visual Studio code, which means you will have a set of ASP.NET Core development tools available all for free, across all different platforms including Windows, MacOS and Linux. Today, let’s see how we could setup such development environment and start coding by using Visual Studio Code.

Although both Visual Studio Code and .NET Core toolset have great support of MacOS and Linux systems, I will still use Windows to demonstrate, because my blog client app is a Windows-based application, I don’t want to switch between Windows and Linux/MacOS when I am writing. Anyway, if you’ve got a MacOS or Linux box on your hand, just go ahead. I am pretty sure that most of the steps I am introducing here are the same in other operating systems.

If you are going to work with docker containers, you should also pay attention to the tags supported by the microsoft/dotnet image. As indicated by the official image description on Docker Hub, the latest version of common tags include the followings:

Open https://dot.net in your web browser, it will redirect you to the .NET home page, from which we can click the Download button and start our journey there. In the download page, you can choose by operating system and the type of the framework (Either .NET Core or classic .NET Framework). Let’s just download the .NET Core SDK for Windows by clicking the button indicated below: 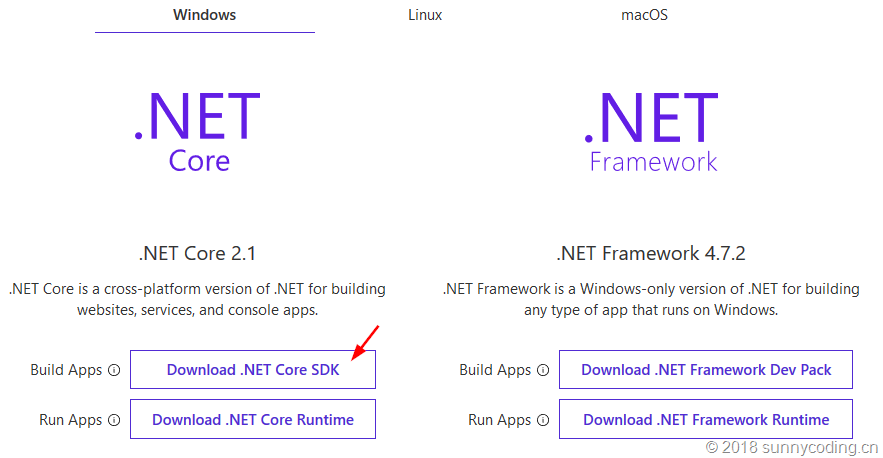 After downloaded successfully, just double click the executable file and install the SDK on your Windows machine. The installation process is pretty straightforward, you just need to click Next several times and then you should finish the installation. Now, open your command line tool and type the command below:

Which should give you the version of the .NET Core SDK that you’ve just installed: 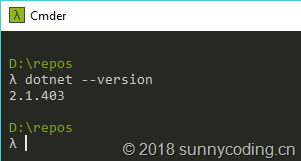 Hmm, not bad. Now we have our runtime and SDK for developing an ASP.NET Core app, the next step is to install the integrated development environment, a.k.a. IDE: Visual Studio Code.

Another choice for MacOS developers is Visual Studio for Mac, which has been optimized for MacOS operating system. But I don’t want to discuss more about Mac here, if you are interested, you can visit its official site for more information.

Firstly, we should create a folder in which we will place our source code, then switch to that folder and start Visual Studio code there, please note that we placed a period at the end of the “code” command, indicating that we’d like Visual Studio Code to open the current folder after its startup:

Now the terminal window in the Visual Studio Code looks like this: 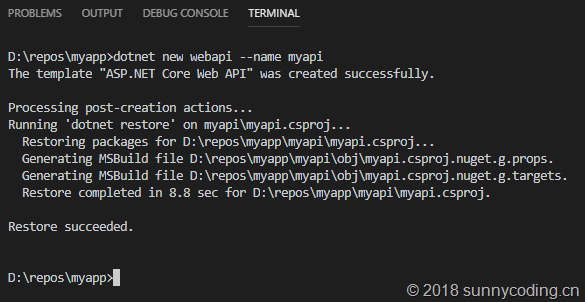 And you will notice that all the project and source code files are now visible in the Explorer: 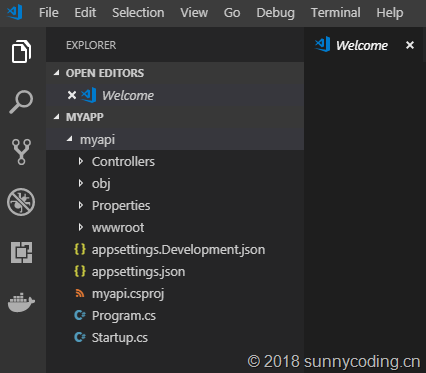 Once you’ve clicked any source code files, a notification message will appear at the right-bottom corner of Visual Studio Code, telling you that there are available extensions for C# development, asking you if you’d like to install. This notification occurs only once when you first time work with C# projects. Here I’d recommend the official C# extension for Visual Studio Code:

Now let’s install it by clicking the Install button. After reloading the Visual Studio Code, it equipped with C# programming capabilities.  From the code editor you can see that there is a bulb icon at the left side of your code snippet, providing you a list of quick access actions to help refine your code: You can now switch to the Debug tab and click the cog icon to fix the debugging configuration. In the Select Environment drop down list, simply choose .NET Core:

As a result, VS Code will generate two files under the .vscode folder in our working directory. These two files are tasks.json, which defines the build tasks, and the launch.json, which defines the debugger launching parameters. For now, you don’t need to care about the detailed contents of these two files, what you need to do is setting up a breakpoint in your source code and hit F5 to start debugging. If you are already a Visual Studio user, you should be very familiar with the debugging shortcut keys, since VS Code has the same hotkey settings as Visual Studio by default. And you should also be familiar with the behavior that, when the ASP.NET Core debugging has started, a web browser will be opened, and once you’ve reached your RESTful API, the breakpoint will be hit and VS Code window will be restored for debugging: It is pretty simple to create and develop ASP.NET Core applications by using .NET Core SDK and Visual Studio Code. All of the tools and libraries we’ve used are open source and can be run on any operating systems, they are free and easy to use. Along with the development of .NET Core, more and more 3rd party libraries such as MongoDB, Redis, RabbitMQ, PostgreSQL, MySQL, Steeltoe, Consul, Ocelot, etc. now have their .NET Core compatible builds, such that application developers can use those libraries to build cross-platform .NET apps and meet mission-critical business requirements. .NET Core apps can also be easily built into docker containers, which makes them to be cloud-friendly and implement modern software architectures like Microservices architecture more conveniently. I would say that .NET Core ecosystem is now getting better and better, and always will be.

Please do not hesitate to let me your thoughts by leaving a comment below. Happy coding…